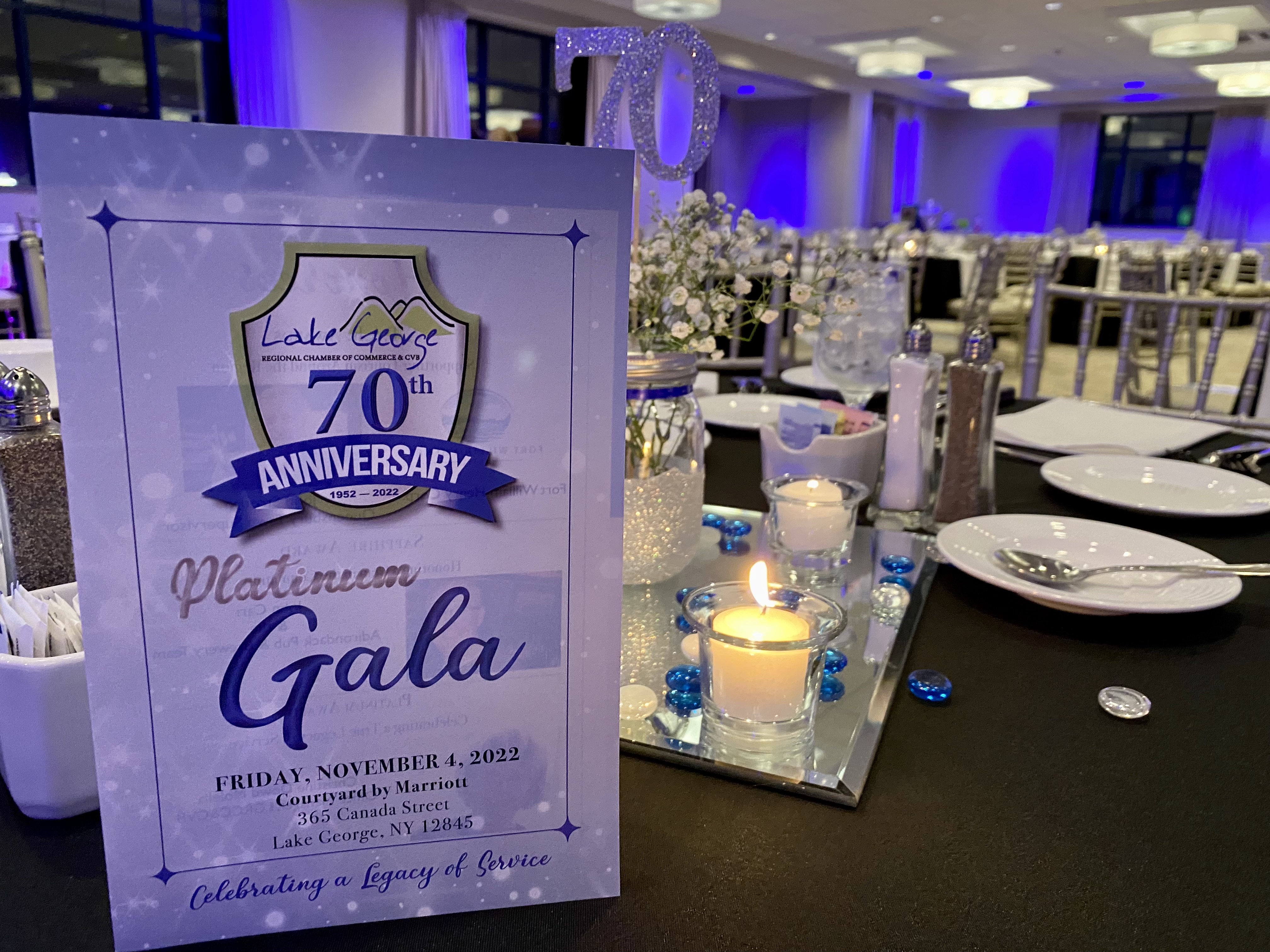 LAKE GEORGE, NY — The Lake George Regional Chamber of Commerce & CVB is thrilled to announce its annual honorees as the Chamber continues to celebrate its 70th anniversary, commemorating a legacy of service.

The S.T.A.R. (Supporting Tourism Around the Region) Award was created in 2006 to recognize organizations or individuals who help grow the tourism economy, which is vital for supporting jobs and offsetting the tax burden of residents. This year’s S.T.A.R. Award honores are the Fort William Henry Corp. and Queensbury Town Supervisor John Strough.

In 2017, the Chamber created the Sapphire Award to honor a “gem” in our community whose efforts directly benefit the hospitality industry in a profound way. The Adirondack Pub & Brewery Team and Owner John Carr are the recipients of this year’s Sapphire Award.

In honor of the Chamber’s 70th Anniversary, the Chamber also created a “Platinum Award” for this year to recognize Office Manager Christine Dowd Molella who will retire at the end of the year following 45 years of service.

The awards were presented at the Chamber’s 70th Anniversary Gala Celebration on Friday, Nov. 4, 2022, at the Courtyard by Marriott in Lake George. The event sold out with nearly 200 people registered to attend.

ABOUT THE S.T.A.R. AWARD WINNERS:

The Fort William Henry was recognized for its longevity as well as recent investments in its property including plans to transform the historic Carriage House on its property into a weddings, meetings and arts venue, scheduled to open next May. The property is also the “host” to many major events that impact the entire region including the Americade, Adirondack Nationals car show, Lake George Music Festival among others. Offering unparalleled views of Lake George and surrounding mountains, The Fort William Henry Hotel and Conference Center features upscale lodging with the perfect mix of historical elegance and modern conveniences.

“The 165+ year history of this institution is one of perseverance and succeeding against the odds. It is difficult to imagine this community being what it is today without the FWH as an anchor,” said Ryan Moore, CEO of Behan Communications. Moore, former Warren County Administrator and 2021 S.T.A.R. Award winner, presented the award to the Fort at the Chamber’s Gala.

Queensbury Town Supervisor John Strough’s continued efforts on behalf of the tourism industry through his years as town supervisor have helped grow the economic impact around the region. He is also personally dedicated to our heritage tourism and raising awareness about our rich history. Strough has been in his current elected position for five terms, which started January 1, 2014. Previously, he was elected to five Town Councilman terms for Queensbury Ward 3 from 2004-2013. He also served as Deputy Town Supervisor in 2013, the year preceding his current position. He has spearheaded many legislative initiatives as well as serving on or directing several local boards and committees in the community, including the SUNY Adirondack Board, the Warren County EDC Board, and many lake preservation committees and boards. He developed, designed, and built the Rush Pond Way and Half Way Brook hike/bike trail systems and oversees the direction and implementation of many major infrastructure projects for Queensbury. He continues to spearhead and develop many initiatives including solar, fiber optics, lake and land preservation, and various economic development projects. Additionally, he has recently written several published articles and essays on various land and water preservation projects and historical summations on Blind Rock, Queensbury, Warren County and others. Supervisor John Strough has lived and worked in the Town of Queensbury his entire life. He retired from a lifelong career as a history teacher at Queensbury schools, while he and his wife raised a son and daughter, and are now proud grandparents.

“Outdoor recreation is what we’re all about. John is as strong an advocate for outdoor recreation that you’ll find in local government, and it shows. Queensbury provides local residents and visitors with more recreational opportunities than far larger communities,” said Moore, who presented the S.T.A.R. Award to Strough.

Watch the awards presentation below!

ABOUT THE SAPPHIRE AWARD WINNER:

The Adirondack Pub & Brewery team is a true gem and has demonstrated that for more than two decades of community service. Whether they are serving dinners at the Caldwell Presbyterian Church or fundraising for Big Brothers, Big Sisters, Rotary, or Lions Club, they are always happy to provide their time, talent and products.  During the pandemic, the staff, all remained employed. When the Pub wasn’t open, they were assigned to prep meals for seniors a few days a week in addition to other areas in the community that needed "hands-on" assistance.

They also coordinate Oktoberfest weekend events to benefit a variety of charities each year, among other events that ultimately give back financially and in other ways to charity.

“It’s through his dedication and leadership that the team thrives so much and has made such a big impact not only to themselves but to the economic viability of many businesses around the region,” said John McDonald, Past District Governor of the Lions Club, which was the beneficiary of the Oktoberfest two different years resulting in $26,000 toward Camp Abilities Saratoga, a a one-week educational sports camp for children and teens who are blind, visually impaired, and deafblind.

ABOUT THE PLATINUM AWARD WINNER:

About the Lake George Regional Chamber of Commerce & CVB

The Lake George Regional Chamber of Commerce & CVB, Inc. strives to drive tourism to the Lake George region year-round while fostering a vibrant business community. The Chamber seeks to promote growth and development of its member businesses by offering networking events, educational programs, ribbon cuttings and other opportunities. Founded in 1952, the Chamber is a member-driven, not-for-profit 501 C (6) corporation. The Chamber, with a regional mindset, comprises more than 430 members in various sectors of the business community. The Chamber staffs the Visitor Center on the corner of Beach Road and Canada Street in the village of Lake George and the Adirondacks Welcome Center on the Northway between Exits 17 and 18 and typically serves more than 100,000 visitors annually. The Chamber also publishes an annual Travel Guide with a 75,000 circulation and Community & Business Directory geared toward people and businesses looking to move to the area. The Lake George Regional Convention & Visitors Bureau (LGRCVB) is a division of the Lake George Regional Chamber of Commerce & CVB and works as an extension of the Warren County Tourism Department. While the Tourism Department markets Warren County to the leisure consumer tourism market, the mission of the LGRCVB is to bring year-round, weather-proof group business to Warren County in the form of meetings, conventions, reunions, sports events, weddings, and more. Learn more at lakegeorgechamber.com . Connect with the Chamber on Facebook, Twitter, Instagram, and TikTok.