Lake George One of Top 9 Freshwater Lakes in U.S.

It comes as no surprise to us! The Queen of American Lakes continues to be our area’s main attraction and the COVID-19 pandemic reinforced the value and importance of protecting our natural resources.

Lake George has a long history ranking as one of the top water bodies in the U.S. Our 3rd President Thomas Jefferson was famously taken with its unique beauty.

"Lake George is without comparison, the most beautiful water I ever saw; formed by a contour of mountains into a basin... finely interspersed with islands, its water limpid as crystal, and the mountain sides covered with rich groves... down to the water-edge: here and there precipices of rock to checker the scene and save it from monotony,” Thomas Jefferson wrote on May 31, 1791, to his daughter.

Jefferson wrote that letter during a “Northern Tour” with James Madison, who would become America’s 4th president, Jefferson found that his periodical headaches vanished after spending time in the area, viewing battlefields, botanical novelties and fishing on Lake George. 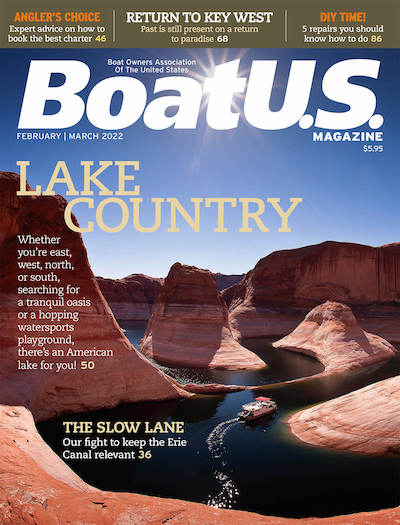 “With so many lakes, there's no way to rank ‘the best’ in the U.S., but some are so exceptional, they warrant a road trip, whether it be trailering a boat, or a flying in for a rental or charter,” the article states.

Freshwater provides a very different boater experience than saltwater, which can wreak havoc on a boat’s hull and running gear due to high salt and mineral content.

There are also some great fishing opportunities in tranquil freshwater like Lake George, which is home to Landlocked salmon, which is stocked annually by Depart-ment of Environmental Conservation, lake trout, brook trout, bass, yellow perch black crappie.

The article includes a great profile of Lake George. Here is a snippet:

“There are crystal clear lakes ... and then there's Lake George. New York state rates its quality as ‘Class AA-Special,’ the same as drinking water, and many of the shore-line homes draw drinking water from the lake. ‘The waters are the clearest I've ever seen, and it has a great boating history and culture,’ says BoatUS Member and local boater, Albert Gray.

Credit the steep surrounding Adirondack Mountains for that. The towering forest-green scenery envelopes the lake, creating tucked-away bays that access quiet hik-ing trails. Locals boast of its nickname, the Queen of American Lakes. At the hub is the small town of Lake George (pop. 3,500), historic for its battles (French & Indian War) and its early 20th century recreational resort town roots, including Million Dol-lar Beach, the lake's largest and most popular beach. The Lake George Steamboat Company runs three cruise ships, including Minne-Ha-Ha, one of the last steam paddlewheel ships in America.”

Getting out on Lake George

Lake George is home to a Freedom Boat Club franchise! You can join this club and use your membership in other locations.

If you’re looking for a marina, check out these options below.

If you don’t have a boat, there are many ways to get out on the water.

Check out some options below!

About Boat Owners Association of The United States (BoatUS):

Celebrating more than 50 years, BoatUS is the nation’s largest advocacy, services and safety group with more than 800,000 dues-paying members. Our flagship publication, BoatUS Maga-zine, is the largest circulation recreational marine publication in the US with engaging content that speaks to the passion for boat ownership. BoatUS is also the boat owners’ voice on Capitol Hill, fighting for their rights. On the road, we are The Boat Owners Auto Club® offering Trailer Assist® to help ensure a roadside trailer breakdown doesn’t cancel a trip to the lake. On the water when boats break down or run aground, our 600+ vessel, 300+ location nationwide Tow-BoatUS® fleet brings them safely back to the launch ramp or dock. BoatUS offers GEICO boat insurance policies that give boat owners affordable, specialized coverage and superior service they need. We help keep boaters safe and our waters clean with assistance from the 501(c)(3) nonprofit BoatUS Foundation for Boating Safety and Clean Water. Visit BoatUS.com.