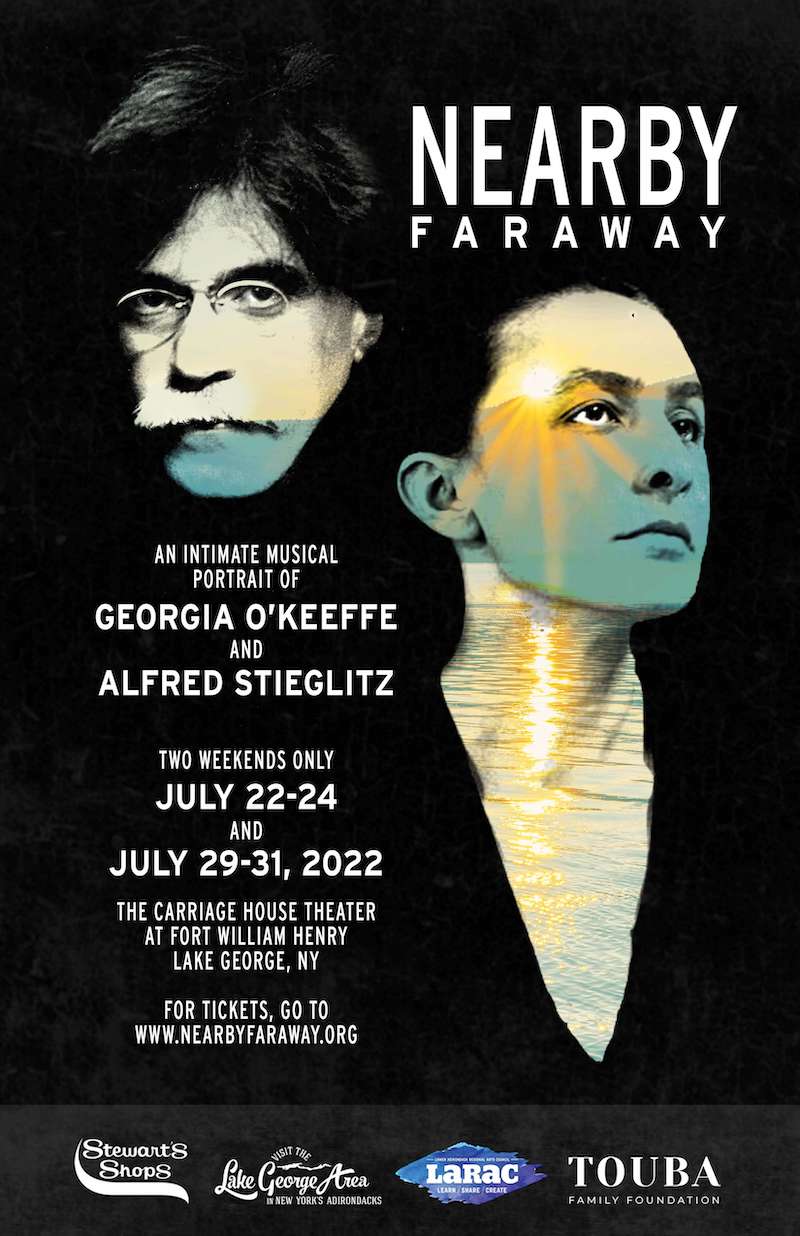 Georgia O'Keeffe is one of the most celebrated female artists in the United States. Her iconic paintings with distinctive colors and abstract images defined a groundbreaking style that is unmistakably hers.

Now a new musical, Nearby, Faraway is debuting in Lake George about the turbulent 30-year, real-life love story of Georgia O'Keeffe and her husband/manager, photographer Alfred Stieglitz. Together the couple redefined art, marriage, and celebrity.

A little about O’Keeffe and the Lake George connection

O’Keeffe was born on November 15, 1887, in Wisconsin, but her talents led her to the shores of Lake George near the turn of the 20th century.

Mary Witse Fuller founded a women’s retreat called Wiawaka in 1903 for women who were working in textiles in the Troy area. Wiawaka means “the great spirit of women” and is the oldest and longest continuously operating retreat for women in the United States. Wiawaka remains open today for overnight retreats and day passes with many programs and gorgeous grounds.

It was at Wiawaka that Katrina and Spencer Trask built their first artists’ re-treat at Wiawaka – an Adirondack lodge known as Wakonda where students from the New York Arts Club held their first retreat. Georgia O’Keeffe was a registered guest artist at Wiawaka in 1908. The Trasks are also known for founding Yaddo in Saratoga springs.

The opportunity for O’Keeffe came from a scholarship.

O'Keeffe attended the Art Institute of Chicago from 1905-1906. and then from 1907-1908, She then traveled to the Northeast to study at the Art Stu-dents League in New York City from 1907 to 1908. In 1908, the Art Students League awarded O'Keeffe a scholarship that allowed her to attend a summer retreat at Wakonda in Wiawaka on the shores of Lake George. This was O'Keeffe's first introduction to the Lake George region, which would remain a special place in her life.

From 1918-1934, Georgia O'Keeffe spent part of the year at Alfred Stieglitz's family estate, located just north of Lake George Village. During this time, she was inspired by the area as they created many of her groundbreaking works and paintings.

Read a news release below about the new musical, Nearby Faraway!

LAKE GEORGE, NEW YORK — Nearby Faraway, the musical centerpiece of an “O’Keeffe-Fest” here in Lake George this summer, premieres the last two weekends in July at the Carriage House Theater at Fort William Henry. This new musical dramatizes the turbulent 30-year, real-life love story of Georgia O'Keeffe, America's favorite painter, and her husband/manager Alfred Stieglitz -- the most written about couple of the 20th century -- as they redefine art, marriage, and celebrity.

The musical drama features a score by International Alliance of Women in Music's Catherine Reid, book and lyrics by Zigzag author Neal Herr and stars Actors Equity’s Hillary Parker. With an evocative set designed by Adirondack Scenic and animated projections of O’Keeffe-inspired paintings by local artists, this dynamic, groundbreaking musical will be the blockbuster event of the summer.

The Warren County Historical Society calls this festival, celebrating the Centennial of O’Keeffe’s breakthrough years here, “an enormous benefit to heritage tourism which will educate, entertain, and inspire residents and visitors alike.” The musical will conclude a free, two-week “O’Keeffe Festival,” including preview concerts, beginner and advanced painting classes, slides about Stieglitz at the Bolton Museum and an Alfred & Georgia Celebrity Lookalike Fashion Show at the Hyde Collection.

Adirondack Institute is producing Nearby Faraway with grants from Warren County Tourism, LARAC, Stewart’s and the Touba Family and Cloudsplitter Foundations and has put on concerts here for 20 years.

Composer Catherine Reid, a native of Queensbury with an MFA from NYU in musicals, has received numerous commissions locally and in NYC for oratorios, song cycles, student and adult musicals.

Bookwriter Neal Herr, credited with more than 800 songs, has an MFA in musical theater from NYU, has worked with Broadway stars and writers and is now a retired English professor, performer and producer.

To purchase tickets or for more information visit the website: Nearby Faraway.

This press release was composed and sent by Advokate, LLC